God is in Control! Election aftermath. 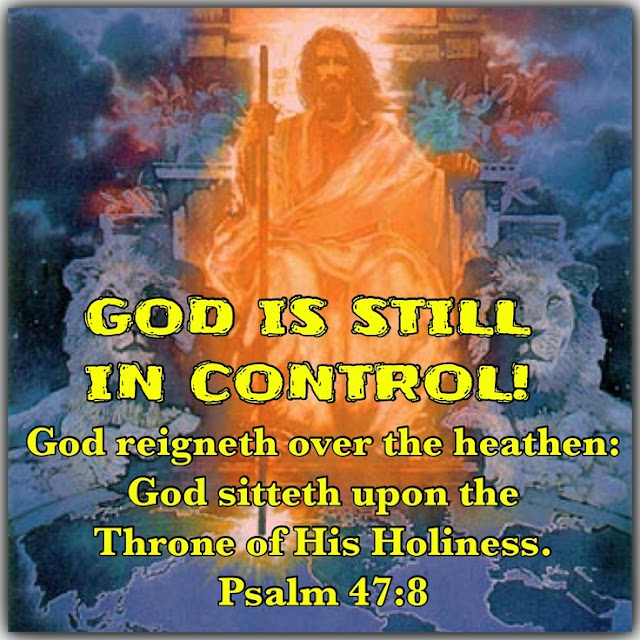 I had a post all set up to talk about the Lord's promise of protection on us and our families, but I felt compelled to comment on the election. It would appear that Biden has now been elected, yet has he? (see below) Many of my followers are no doubt upset about that because you are aware of the type of man Biden is and the agenda he has planned. Whether you liked Trump or not, he did good things for America, for freedom, the economy, religious liberty, and for Israel. He stood for the Constitution and individual liberty and he made America strong militarily.

Throughout the election, I prayed and fasted for God's will. I never really prayed for one or the other man to win, only that God would have the final say. I prayed for both men and their families to be saved. God is playing 4-D chess and only He knows the end from the beginning and who He needs to have as President to further His plans for the world. If you can really get that deep in your soul, it will bring a great deal of peace.

It is He who changes the times and the seasons; He removes kings and establishes kings. He gives wisdom to the wise And greater knowledge to those who have understanding! Daniel 2:21

God reigns over the nations; God sits on His holy throne. Psalm 47:8

Declaring the end from the beginning, And from ancient times things which have not been done, Saying, ‘My plan will be established, And I will accomplish all My good pleasure’; Isaiah 46:10

Having said all that, I don't believe this mess is over. My husband is a research scientist and he has been doing some intense investigation on the election results and voter fraud. In addition I have a family member and an avid QAnon follower who gets lots of inside information (whether true or not, I don't know). What my husband has discovered is that there has been so much voter fraud, so many lies, so many votes switched during this election that the evidence is overwhelming. These are not only small batches of fake votes here and there, but massive votes changed through hacking computer code, changed from Trump to Biden.. we are talking in the 100,000s range. Well known and respected lawyers like Sidney Powell are bringing forth proof. I believe the next step is for the Supreme Court to look at all the evidence, OR if the contest is deemed too close to call, then Congress is allowed to vote for the next president in which each state gets a single vote.

My family member says that this was all planned by Trump to root out the voter fraud corruption and bring these people out in the open so they could all be arrested and we could revamp the entire voting system in this country. Apparently they must wait until 10 days after the election for the DOJ, by constitutional law, to get involved in any election. Then things should start happening.True? I don't know. But yes, I would love to see all these cheaters, liars, and traitors arrested. Time will tell.

How this all fits in with Biblical prophecy.

We know we are in the last minutes of the last days.  We know this because Jesus told us we would be the last generation before His coming. (Matthew 24:12). We know this because we see the One World Government on the rise and the coming Vaccine (which will become the Mark of the Beast). Therefore, we need to examine all of this in light of these facts. We know that in order for any world government to form, America must be taken down. We also know that the Gog-Magog War of Ezekiel 38 cannot happen until America has turned its back on Israel. THIS war is the war that, when it's over, the Antichrist will come along and strengthen that infamous 7 year peace treaty that will mark the beginning of the 7 year Tribulation.

Your throne, O God, is forever and ever; The scepter of uprightness is the scepter of Your kingdom. Psalm 45:6

Hence, knowing all of this, AND knowing God is in control, here are my thoughts

IF Biden remains as president, I see the time of our departure closing in faster than ever. Mark my words, he (or Harris) will rip us of our freedoms, turn our nation into a socialist/communist nation, enforce mandatory vaccines, destroy Christianity, and make America so weak that China will have no trouble conquering us (As they are now trying to do in every way possible)

If Trump gets this thing turned around by the courts or congress, MASSIVE Riots will ensue. Can you imagine how the left will respond? They will think that Trump cheated, bought off the court, or somehow stole the election, and they have already proven how violent they can be. Our nation will enter its 2nd Civil War in which we will be killing each other off. A nation divided against itself cannot stand! And it is at this point that our enemies such as China will attack us while Russian and Iran attack Israel.

I know I haven't presented a very positive outlook for either case. The truth is, unless America falls on her knees right now and repents of her sins and turns back to God, then we are truly out of time for this nation. The Bible is very clear how things end up on earth during the last 7 years. If you don't know, I suggest you read Revelation.  It is not a pretty story. As we approach the start of that horrendous time period, I don't see anywhere in the Bible where things get better. In fact, it's just the opposite. Like Birth pangs, things get progressively worse and with more intensity.

Yet this is ALL good news for those of us who have made Jesus our Lord and King!

God doesn't care about nations. Yes, He loves Israel and He has been with America because we were founded on His Holy Principals and because for many years, God-fearing Christians made up the population.

But in the end, God's only interest is in ONE Kingdom, the Kingdom of God.

His other singular interest is in getting as many people to enter that Kingdom as possible. He will use whatever tools He can to accomplish that task, including setting up kings and taking them down. So, no matter where you fall on the political spectrum, I beg you to shift your allegiance to the one Kingdom that is soon coming and the one that will last forever!

No man, no president, no government or military will save us. Only Jesus. He is the Way, the Truth, and the Life! And it is His Kingdom that we all should be focused on now.

Fear not, little flock; for it is your Father's good pleasure to give you the kingdom. Luke 12:32