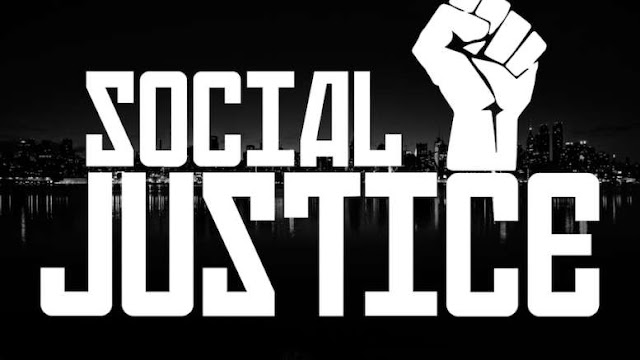 You may have heard the term "Social Justice" bandied about lately, particularly from the left. Recently, I ran into an old friend of mine's twitter post and what she was saying shocked me. I used to get together with this lady and pray and talk about the Lord.  We've lost touch the past few years, but her posts were so alarming to me, even her Bio Description of a "Social Justice Christian with a Gay Son".  So I wanted to look up what exactly social justice is. I mean the left makes it sound so nice

The Dictionary defines it as fair treatment of all people in a society, including respect for the rights of minorities and equitable distribution of resources among members of a community.

Social justice is justice that follows the principle that all individuals and groups are entitle to fair and impartial treatment. Social justice attempts to prevent human rights abuses. Social justice is based on notions of equality and equal opportunity in society. It focuses on the full and equal participation of all citizens in economic, social and political aspects of the nation. Social justice can also refer to advantages and disadvantages distributed in a society. Social justice derives its authority from the codes of morality in each culture and differs from culture to culture. United Nation’s objectives of social justice policies include social, economic and cultural rights, including right to an adequate standard of living; right to work and equal pay for equal work; right to education; and right of minorities to enjoy their own religion, language and culture.

I don't know about you but that sounds really good!!  I want that too. Who wouldn't want fair and impartial treatment of everyone?  But you know what? If I've learned one thing in the past few years, it's that you have to look deeper, beyond the nice, flowery language to see what's really going on.

I highlighted a few phrases that stood out to me in both definitions. Seems to me they are clearly talking about distribution of wealth to everyone in a society. They talk about a "right" to a certain standard of living and a "right" to education. It sounds lovely, but these phrases fly smack in the face of the freedoms we have enjoyed here in America. Our founding fathers created a country that had the most individual freedom of any nation on earth. In the Declaration of Independence they proclaimed that every person should have the right to life, liberty, and the pursuit of happiness. There was no mention of a guaranteed income, standard of living, education or health care. These are things everyone is able to achieve on their own with some hard work, discipline, and patience.  Yes, I know everyone starts off with different advantages and disadvantages, depending on their family's wealth, etc. But that's the point of America. We all have the same opportunity to achieve whatever we want. Some may have to work harder for it, I agree, but it is still achievable.

The real problem with what they are calling Social Justice is that in order to achieve equal distribution of wealth and a certain standard of living and education for everyone, the government is going to have to get involved, collect the wealth and then distribute it as needed. Once the government is the one giving you your paycheck, they own you and you might as well kiss your freedoms goodbye.

From an article in the American Thinker

Social justice is the complete economic equality of all members of society. While this may sound like a lofty objective, what it really means is that wealth should be collected by the government and evenly distributed to everyone. In short, social justice is communism. It is rooted in the Marxist idea that the money people make and the property they own do not rightfully belong to the people who make the money and own the property.
Karl Marx's ultimate criticism of capitalism is its recognition of private property. The reason private property is so evil, Marx contended, is that it is a function of economic class warfare. In other words, "the rich" use the concept of private property to oppress "the poor." In order to understand this convoluted thought process, Marx's view of money must be examined, since money is the means by which private property is acquired.
Did you know that CEO Klaus Schwab,of the World Economic Forum and the Great Reset states that their goal is by 2030 that "You will own nothing and be happy".  Don't believe me, look it up.
Back to the point of this. Is God a God of Social Justice? Well, God is definitely not a respecter of persons. In other words He loves and values each person equally. To Him, there is no rich, poor, black, white, Jew, Gentile, or any other type of human. We are all equal to Him.
Then Peter opened his mouth, and said, Of a truth I perceive that God is no respecter of persons: Acts 10:34
here is neither Jew nor Greek, there is neither slave nor free, there is neither male nor female; for you are all one in Christ Jesus. Galatians 3:28
And of course God's love of the poor and downtrodden and oppressed is expressed all through the Bible. in fact He calls it true religion to help the poor.
Pure and undefiled religion before God and the Father is this: to visit orphans and widows in their trouble, and to keep oneself unspotted from the world. James 1:27
But aside from praying for those in power, and obeying their laws, Jesus made no mention of government, politics, voting, taxes, distribution of wealth, free stuff etc. In fact, based on several of Jesus's teachings, we can deduce that He believed in hard work to achieve good results and punishment for those who were lazy. (Parable of the Talents, 10 Virgins, etc)
In Luke 12, a man approaches Jesus and asks Him to make his brother divide their inheritance. Jesus's response
But He said to him, “Man, who made Me a judge or an arbitrator over you?” Luke 12:14
Clearly Jesus told us to give to the poor, be generous, help those in need, the widow and orphan. But He NEVER said the government should be doing that. He put the responsibility solely on us.
In another of Jesus's parables, a vineyard owner hires workers for the day, but discovers he needs more workers, so he hires more and more and eventually pays each worker a full day's wage. But the ones who worked all day complain that it isn't fair!  Jesus replies.
Is it not lawful for me to do what I will with mine own? Is thine eye evil, because I am good? Matthew 20:15
In other words, it would seem that Jesus believed in things like Supply and Demand, Private Property, and contracts for hire. Things which are not part of Socialism
Though it sounds lovely to have everyone paid equally and able to have nice homes equally, if it means the Government will be in charge of that, then it can only end in evil. The more power and control you give to the government, the less freedom you will have. Power corrupts and those in power will only be out for themselves, without a thought or care of you. That has been proven over and over in history.
We see this already beginning in our nation now. You think Congress and those in DC care about you? They enter politics with very little and leave their positions as millionaires. How is that possible? They get kickbacks from foreign governments and also US companies for voting certain ways or passing bills that grant them funds. That was more than obvious in the recent stimulus package. VERY LITTLE was given to people in need here in the USA, while millions was sent overseas for silly things. Much of that money comes back to congressmen as kickbacks. Don't be fooled by their language of how much they care about the little guy. This is what socialism and communism is all about, a group of very wealthy elites running everything while the masses live in poverty with no rights.
Is God a God of Social Justice? Certainly NOT by the definition of the liberals. Unfortunately, it appears many Christians are buying into the notion that Jesus was/is a socialist, when nothing could be further from the truth.
I feel bad for my old friend, but I am not surprised. Here in CA, many Christians believe as she does. It's certainly not something that will affect her salvation, but I've noticed that Christians who believe this are generally very liberal Christians and that often extends into other beliefs and faith issues, such as endorsing abortion, accepting gay marriage, etc. Whether or not these things can affect a person's salvation is up to God, but as for me, I don't want to find myself aligned with the world and therefore at enmity with my Savior when He comes!