Great Review of Timeless Treasure! It is now on Sale for a Short time! 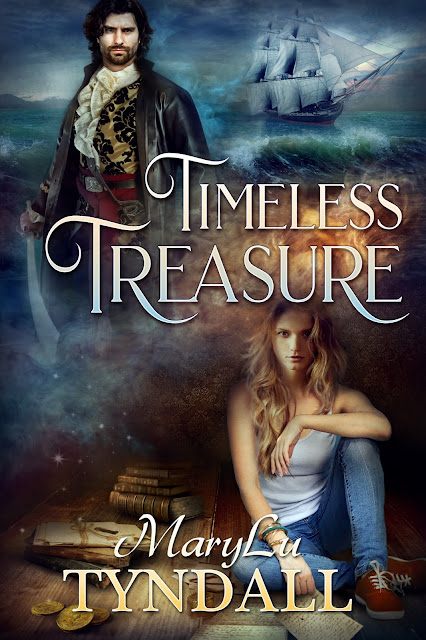 I received this wonderful professional review from Cindy Vallar, the editor of Pirates and Privateers, an online site and newsletter about all things Pirates!

Her family has long been cursed. Her father is the latest to be incarcerated, but he abandoned her when she was six months old and now that her mother has passed, Lexie Cain is alone, penniless, and homeless. Her mother’s legacy – a gold coin and 300-year-old letters signed by Stede Bonnet – offers her a slim hope. According to her mother, the pirate is a distant relative and pirates buried their treasure, didn’t they? With no other options open to her, Lexie heads to Charleston, South Carolina, hoping the etchings on the coin and clues in the letters will lead her to the trove.

Although his beloved son died in 1712 and four years have passed, Stede Bonnet is still haunted and tormented by the loss. He has a wife, other children, wealth, and a good reputation, but Barbados is more a prison than a home. His only saving grace is the love of his life, Melody Rogers, but she is not his wife and must now accompany her father to Charles Town where he will endeavor to save the souls of the pirates and other scoundrels living there. Stede’s only option is to leave his life behind and go on the account. Perhaps plundering will gain him a new fortune on which he and Melody can live one day soon. To that end, he builds a pirate ship, hires a crew, and sets sail. But he is a soldier, not a sailor, and gaining the crew’s respect proves a difficult and perilous task.

Barret Johnson, a handsome history professor at Charleston Southern University, feels truly blessed. He has a family, comes from money, has a job, and is working on a new book about Stede Bonnet that might garner him an award that will allow him to continue his research on South Carolina pirates. The woman with a tattoo who barges into his office irritates him. He doesn’t believe a word Lexie says, but if there’s even a slim chance that the letter she shows him is authentic, he must pursue this new avenue of research.

Lexie thinks Barret is arrogant and the less contact she has with him, the better – but she needs his help to understand her ancestor’s writings. No one else knows as much as he does about Bonnet, but Barret is not the only one interested in the letters. Someone is stalking her. Then someone breaks into her apartment. Barret comes to her rescue, and the more time he’s with her, the more of an enigma she becomes. She has so little, but goes out of her way to help others even less fortunate than herself. He’s determined to protect her, even when her stalker proves that he is willing to do anything and harm anyone, especially those closest to her, to get the letters and the coin.

This inspirational romance will captivate readers with its two parallel love stories. One takes place in present-day Charleston, the other in the past. The outcomes differ, but Tyndall deftly contrasts the differences between those who have and those who have not. She does an excellent job portraying Blackbeard and Stede Bonnet, weaving a plausible tale that fills in the blanks that history has left of their association. Bonnet may be an ineffective pirate and not necessarily likeable, but readers will sympathize with his predicament. Lexie’s and Barret’s emotional struggles pull at the heartstrings in a deftly woven love story that will become a cherished favorite.

Please be sure to visit Pirates and Privateers website and check out all the goodies! Sign up for her newsletter too!

In Honor of such a wonderful review, I'm reducing the Kindle price of Timeless Treasure from 4.99 to 1.99 from today Tuesday, March 30th - Tuesday, April 6th!  This is a perfect chance to get your copy now.