Important info on VX Ine from one of my blog followers. 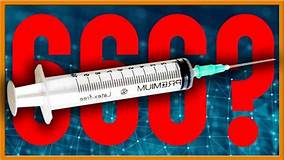 Many Thanks to Georgette Curious for this information

A Future Vaccine to Prevent Knowledge of Soul and Spirit From The Fall of the Spirits of Darkness (Bristol: Rudolf Steiner Press, 1993; GA 177), p. 85.

October 7, 1917 85 – “The time will come – and it may not be far off – when quite different tendencies will come up at a congress like the one held in 1912 and people will say: It is pathological for people to even think in terms of spirit and soul. ‘Sound’ people will speak of nothing but the body. It will be considered a sign of illness for anyone to arrive at the idea of any such thing as a spirit or a soul. People who think like that will be considered to be sick and – you can be quite sure of it – a medicine will be found for this. . . . The soul will be made non-existent with the aid of a drug. Taking a ‘sound point of view,’ people will invent a vaccine to influence the organism as early as possible, preferably as soon as it is born, so that this human body never even gets the idea that there is a soul and spirit. “. . . the heirs of modern materialism will look for the vaccine to make the body ‘healthy,’ that is, make its constitution such that this body no longer talks of such rubbish as soul and spirit, but takes a ‘sound’ view of the forces which live in engines and in chemistry and let planets and suns arise from nebulae in the cosmos. Materialistic physicians will be asked to drive the souls out of humanity.”

How to modify human behavior
"Funvax" courtesy of the Pentagon

Anthony Patch further describes how these vaccines work.
What is Messenger RNA with Anthony Patch

MaryLu here: I'm adding one of my own that recently hit my desk
Moderna's top scientists: We are actually hacking the software of life
And the light of a candle shall shine no more at all in thee; and the voice of the bridegroom and of the bride shall be heard no more at all in thee: for thy merchants were the great men of the earth; for by thy sorceries (pharmakia) were all nations deceived.
Revelation 18:23 KJV
And he causeth all, both small and great, rich and poor, free and bond, to receive a mark in their right hand, or in their foreheads:
And that no man might buy or sell, save he that had the mark, or the name of the beast, or the number of his name.
Revelation 13:16-17 King James Version (KJV)
And the third angel followed them, saying with a loud voice, If any man worship the beast and his image, and receive his mark in his forehead, or in his hand, The same shall drink of the wine of the wrath of God, which is poured out without mixture into the cup of his indignation; and he shall be tormented with fire and brimstone in the presence of the holy angels, and in the presence of the Lamb: And the smoke of their torment ascendeth up for ever and ever: and they have no rest day nor night, who worship the beast and his image, and whosoever receiveth the mark of his name.
Revelation 14:9-11 King James Version (KJV)
And the first went, and poured out his vial upon the earth; and there fell a noisome and grievous sore upon the men which had the mark of the beast, and upon them which worshipped his image.
Revelation 16:2 King James Version (KJV)
Don't take the Vaccine. Please. Do your own homework
Posted by MaryLu Tyndall at 10:05 AM