FreeMasonry - The Ruler of this Present Age 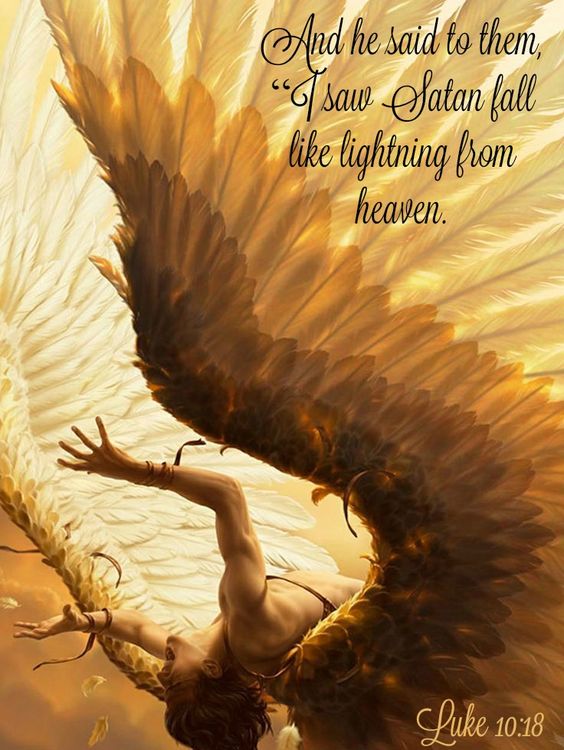 He said to them, “I watched Satan fall from heaven like a flash of lightning. Listen carefully: I have given you authority that you now possess to tread on serpents and scorpions, and the ability to exercise authority over all the power of the enemy (Satan); and nothing will in any way harm you. Jesus,  Luke 10:18-19
Last week I issued a warning to the modern church, and one of the things I mentioned was something I have only recently discovered--that many pastors in Christian churches are Freemasons. I learned long ago that Freemasons were not Christians and that it was a cult of some kind, but I had no idea how deep the rabbit hole went. I extend my thanks to Ron Garbe for putting a link to a video in the comment section of that post because it is from that video and from other X-masons who have contacted me (Thank you Terry Mick!)  that I have learned the truth. The video is 5 hours long, and honestly I wasn't going to watch it, but I felt led by the Holy Spirit to check it out. Because of how busy my life is right now, I had to watch it in half-hour spurts, and let me tell you, it was hard to pull away. I do not know the person talking in the video, but he gives undeniable proof after proof of what he is saying. I will leave a link to this video at the bottom of this post for those interested. I encourage you to check it out.
Much of what I learned over the past week has literally shocked me. If you were watching me on my computer camera, you would have seen my jaw on my desk. 😲  This is hard to do to me these days, but I learned so much and now understand why the world is the way it is. AND for how long it has been this way.
I don't want to duplicate what was in the video, but my goal in this post (which I will try to keep as short as possible) is to summarize the high points. If you want to actually see the proof with your own eyes from the Mason writings and their Bible and from pictures and quotes, please watch the video. I'm hoping it will not be taken down until everyone the Lord wants to see it has seen it.

My Summary of what I have learned about FreeMasons

(From an X-mason who contacted me.: When in the 3rd degree you are kneeled before the alter in the center of the room shirtless,one foot with a sock on, shorts(NOT YOUR UNDERWEAR) and a noose around your neck. You are blind folded and you are asked by the Worshipful Master what do you seek.  Someone whispered in my ear the word light. So i said light. Blindfold was taken off and i saw other masons around the throne with candles around the Worshipful Master. You see the masonic lodge says it is the light or the truth. No man is to be called worshipful. Only Christ. You say your blood oaths by repeating them after the worshipful master and never shall you ever repeat them or even write them to any non member by penalty of having your tongue ripped out by its roots and your stomach torn open to await the beast of the field and or the fowl of the air to get there. Blood oaths they are. You finish by kissing your book of faith
Most are the bible. But some may have the Talmud or the Koran. You are presented in the 3rd degree after you memorize  a whole bunch of stuff...your masonic apron.) 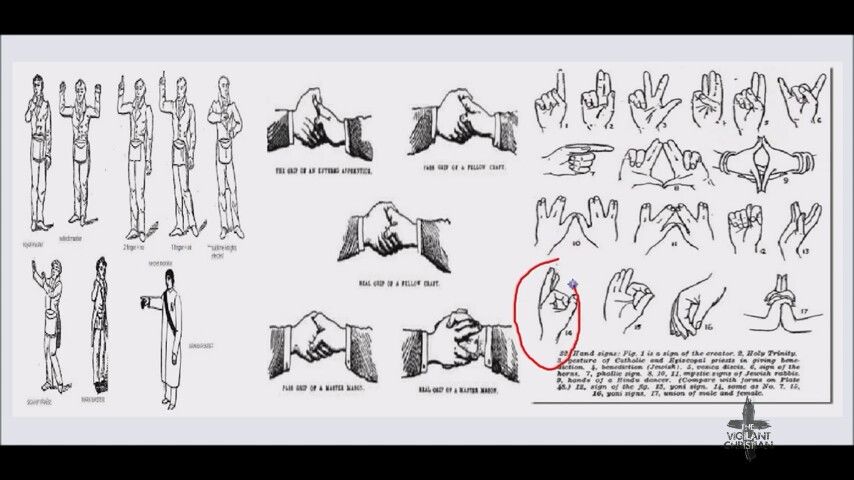 Like I said, the video gives proof of all of this, including pictures of some of your favorite stars and singers using masonic symbols. I knew many of them had to be evil already, but some, I was shocked at.  Also many many of our politicians and those in power are Freemasons. Now that you know the symbols, you can look for it.  So, why am I telling you this? Because our current world is ALREADY BEING RUN BY SATAN. Don't believe me? See the proof in this video. I'm also telling you because many people, politicians and pastors that you trust are wolves in sheep's clothing and are indeed, Masons!
Here's a quote from an X-mason who wrote me. The R.A. or Royal Ambassadors is for young boys in the Southern Baptist church which is a prep to the lodge as well. Since about 52% of Southern Baptist Pastors are Masons
Here's just a few Freemason pastors I discovered.
Billy Graham
Franklin Graham
John Hagee
Ray Comfort
Joyce Meyer
Oral Roberts
Jesse Jackson
Norman Vincent Peale (who was Trump's spiritual adviser by his own words)
Louis Farrahkan
The Pope
Rick Joyner
Kenneth Copeland
Benny Hinn
T.D Jakes
Rick Warren
Robert Schuller
Now I realize some of these are shocking. But they give the Gospel! Don't they? They get people saved. How can they be Freemasons? I honestly don't know. I'm just reporting what I have found and what there is proof of. If they are Masons And they are high up around the 32 or 33 degrees, then they know very well who they are worshiping. But remember Freemasonry is cloaked in Christianity. Our enemy is very clever.
Here's an article you may find informative. I can't vouch for everything in the article but it is certainly worth a shocking glance
Other FreeMasons of interest
Bono - the entire band, actually of U2
Alex Jones
Hitler
Stalin
Ted Cruz
Oprah Winfrey
The Bushes - both of them
The Clintons
Obama
Al Gore
Greta Thunberg
Ronald Reagan (yes, sorry)
Gerald Ford
Harry Truman
Franklin Rosevelt
Lyndon Johnson
George Washington
Benjamin Netanyahu
Walt Disney - All of Disney is Satanic
Here's a short list of some more famous Masons
And a longer list here in this Article
Here's a short video displaying the pastors who are Freemasons
Many of our founding fathers were FreeMasons. I like to think they didn't know what they were into, but all it takes is one look at the way D.C. is laid out like a Pentagram, designed by Freemason Charles L'Enfant. And how the Washington monument, which represents the erect male organ, and whose measurements are 6666 inches tall. 55.5 feet x 12 inches/ft = 666 inches wide, is the prefect complement for the female organ in the Capitol building. (A setup very similar to the Vatican) I won't even mention the tons of pagan symbols and statues all over D.C. And the Statue of Liberty in New York (A pagan goddess)
Is America a Christian nation? While I do believe there have been many many good Christians here, I do wonder if we are truly a Christian nation at all.  Remember Freemasonry is clocked in Christianity, making many believe it is part of Christianity. They do many charities too! But we must be aware that they are a two-headed eagle. One part is good, the other bad, both leading to the same results.  I brought this up in an earlier article about The Great Awakening where I mentioned that on the surface it looks great, but if you dig down deeper, it is all New Age. 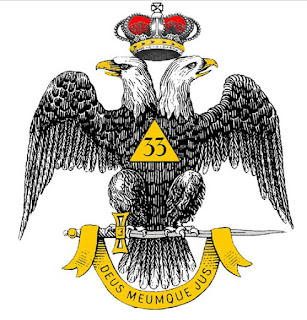 So what is their end game? They want a New World Order, a Global communistic government with Lucifer as the supreme ruler. They hate Jesus and everything He stands for, and they hate those of us who follow Him. I believe they are about to enact their vile plans. The Covid-19 virus was the catalyst. They have all their players in place. Remember their initial goal is to kill off billions of people whom they consider unnecessary eaters. What is the best way to do that? Release a virus, instill fear, lockdown the world, and then demand people take a vaccine that will eventually kill them. When people start dying off in the months to come, and World War 3 kicks off, and potentially an alien invasion occurs simultaneously, they'll have the perfect reason to take over everything.
Believe me, I know how crazy this all sounds. Please before you write me off as some weird conspiracy theorist, please watch the video. Even then, we know this is ALL prophesied in the Bible. How can we deny the truth of their plans when Jesus already warned us?
The Bible says during the Tribulation, there will be a One World Government ruled by the Antichrist and Satan. So everything is going according to plan!
There's one more person I need to show you who is a Freemason 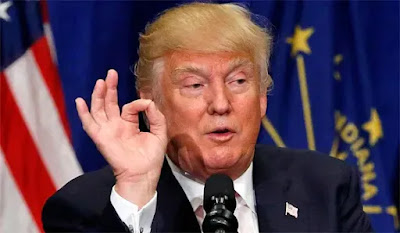 Even if he comes back as President, he's just playing the part of the good half of the eagle. He's just playing a role to deceive the masses. When will you wake up?
Here's a list of FreeMason books if you're interested.
Morals and Dogma by Albert Pike
Morals and Dogma of the Ancient and Accepted Scottish Rite by Albert Pike
The Secret History of America by Manly P. Haul
Here's the Video I'm talking about. If you make it to the end, he gives his testimony, his reason for doing this, and how much he is risking to put all this information out there. If you're not sure about the video, try watching the first hour and then make your decision.
We are close to going home, Saints. Satan's kingdom is rising and they aren't even trying to hide anymore. Keep looking up!!
Posted by MaryLu Tyndall at 12:30 AM