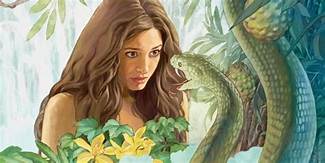 One thing I've noticed about our enemy (Satan) is that he is not creative. He cannot create anything new. He has no imagination. He only knows how to copy what God does. Even the LIE he started this whole mess with, the LIE that he deceived Adam and Eve with and hence, caused mankind to rebel against God, is the same LIE Satan is going to use to deceive the entire world at the end and very soon. Like demonic bookends of a series of horror books, this LIE will be believed by most of the world.
What is that lie? That humans can become like God, that humans can become gods and live forever with immense knowledge and eternal pleasures.
Then the serpent said to the woman, “You will not surely die. For God knows that in the day you eat of it your eyes will be opened, and you will be like God, knowing good and evil.” Genesis 3:4-5
Ever since that fateful day, mankind (with the help of the enemy) has been seeking immortality, power, fame, wealth, and pleasure. Humans fear death, yet we are fascinated by it. We watch movies and TV with all sorts of violence and death. We read books and watch videos of after-life experiences. We love disaster movies and sit around the TV when a real disaster occurs. And oh, how we love our super-heroes who are invincible, eternal, and all-powerful!
Consequently, mankind seeks that eternal elixir that will make us live forever. Ponce de Leon spent years seeking the Fountain of Youth in Florida. (Hey I wrote a book about the Fountain of Youth, The Reckless!) But only in this day and age, with all our technology, does it seem somewhat possible. I'm talking about Transhumanism.
Transhumanism is a philosophical movement, the proponents of which advocate and predict the enhancement of the human condition by developing and making widely available sophisticated technologies able to greatly enhance longevity, mood and cognitive abilities. It is human evolution beyond the natural by combining the human body with technology so to enhance the human condition, improve mental and physical capacities, get rid of disease, suffering, aging, and death, etc.

You may think this sounds like Science Fiction but this type of technology is here now and advancing every day. So where's the Lie? This sounds like a good thing for mankind. Certainly there's nothing in the Bible that says we can't improve ourselves!

Let me ask you this, what would you say if a respectable world leader backed by respectable scientists asked you if you wanted to never get sick, age, never die, and have superhero capabilities? Of course! Who wouldn't say yes to that?!  What if all you had to do was have some injection into your body that would insert the technology required to give you all those things? And what if the only other thing you would have to do is swear allegiance to the current world leader and deny all affiliations with any of those old, antiquated religions and their gods? What would you say then?

And there's that same old lie. The same lie told at the start of mankind and the same lie told at the end. You know, it didn't go so well for Adam and Eve. They died spiritually, lost any relationship they had with God, the Creator, got kicked out of Paradise, had to struggle to eat and survive, and eventually died.  Did Satan tell them the truth or was it all a lie? As is his way, the "Lie" he told bore a smidgen of truth. They did become like God in that they became aware of good and evil and now had the capacity to do evil. Yet that's not what they thought he was saying. They thought they would become super-humans, immortal, with great capacities for knowledge and wisdom.
Hmm. That sounds a lot like Transhumanism. Notice the words I marked in bold above (disease and death).  Could there be something going on today across the entire globe that would cause people to yearn and be desperate for something that would wipe out disease and death? Ah, yes, a global pandemic! And what if that pandemic continued with new and improved variants that were resistant to vaccines so that new and improved vaccines had to be given? And what if another more deadly disease occurred with a much higher death rate, something say like Ebola? What if the people of the world grew so tired of taking vaccines and being on lockdowns and having to wear masks that they would readily accept an injection of technology that would eradicate all disease forever? However, what if along with that injection, there were substances that altered your human DNA and changed you into something that could no longer be considered human?
Who did Jesus die for on the cross? Humanity. Humans. This is why the Fallen angels were offered no salvation, no mercy from God. Jesus's sacrifice on the cross was only for humans, not angels or any other transhumanistic creature. Hence, this is the reason why people who take the Mark of the Beast CAN NO LONGER BE SAVED.  Not even if they regret their decision and repent. There is no sacrifice made for anyone who is not human.
Then a third angel followed them, saying with a loud voice, “If anyone worships the beast and his image, and receives his mark on his forehead or on his hand, he himself shall also drink of the wine of the wrath of God, which is poured out full strength into the cup of His indignation. He shall be tormented with fire and brimstone in the presence of the holy angels and in the presence of the Lamb.  Revelation 14:9-10

Am I saying the current vaccine is the Mark of the Beast? No. Am I saying it will eventually morph into the Mark of the Beast? Yes. Beware the lie! Beware the trap the devil sets!  He is very clever and he has many willing followers in today's world. Yes, there are people in high positions of power who knowingly worship satan. He has told them the same lie and they have bought into it for power, fame, money, and eternal life. But it's all a sham and in the end they will find themselves in the lake of fire right beside him.

For those who won't willingly worship him, he disguises himself as an angel of light, using Scriptures to cast doubt on Almighty God, making God out to be a bully, a rigid, hateful God and making himself out to be the savior of mankind. Do you know your Scripture? Is your faith strong enough and your knowledge of the Bible good enough to combat a Scripture from the Old Testament where God killed thousands of people who disobeyed him? Where God ordered the Israelites to murder women and children? What about those verses where God seems to condone beating a slave in Exodus 21? What is your answer to that? Many many Christians are going to start doubting their faith and the Bible, and instead, take up with Satan. But that's for another post.

Know your God and don't believe the Lie!  We live in an age of great deception and the only way to survive is by knowing the Lord intimately and staying in His Word!

And I will make you to this people a fortified bronze wall;
And they will fight against you,
But they shall not prevail against you;
For I am with you to save you
And deliver you,” says the Lord.
“I will deliver you from the hand of the wicked,
And I will redeem you from the grip of the terrible.”
Jeremiah 15:20-21